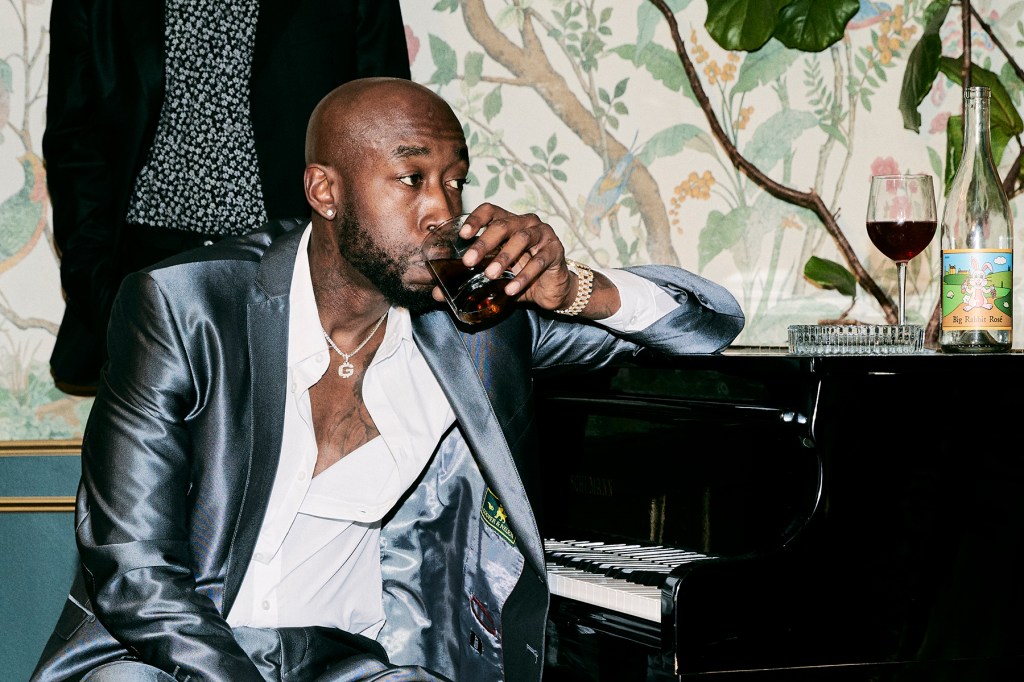 At the center of Freddie Gibbs’ $oul $old $eparately is “Rabbit Vision,” which finds him regretting moments in his life. “Me and Jeezy haven’t spoken in years, but I got love for him/Coulda talked it out, but I spoke out, I let it get to me,” he raps, offering an olive branch to the man who signed him in 2011 before the two had a very public falling-out. As a lush beat from Boi-1da, Jahaan Sweet, and Roget Chahayed winds down, an answering-machine service for the Triple S Hotel Resort & Casino chimes in. (The automated voice belongs to actress and model Rania Nasreen White.) Then, a message drops from none other than provocateur Joe Rogan, who cracks a joke alluding to the 2017 Las Vegas mass shooting. “Listen, I just landed in Vegas. My guy came through. I’ve got mushrooms. I’ve got DMT. I’ve got Kevlar underwear and extra bullets. Let’s fuckin’ go…”

That’s Gangsta Gibbs, though: elegiac and lyrical, obtuse and politically incorrect, the 40-year-old is a throwback to the glory years of street rap, an era when a fiery encounter with someone like Ice Cube would get you equal parts street knowledge strength, revelatory life wisdom, and batshit conspiracies. (On “Lobster Omelette,” Gibbs doubts the efficiency of voting — “President ain’t never love a nigga, who the fuck a nigga sposed to vote for?” — just in time for the midterms.) The voice of the late Pimp C wafts through “Zipper Bagz.” A classic stanza from 2Pac’s “Lord Knows” gets repeated on “Grandma’s Stove.” The hook from Bone Thugs-N-Harmony’s “Foe Tha Love of $” turns up on “Pain & Strife.” DJ Paul of Three 6 Mafia blesses “PYS.” Raekwon drops a verse on “Feel No Pain.”

But it’s not just the golden-era arcana that makes $oul $old $eparately feel like Gibbs is summarizing the long, torturous journey to his major-label solo debut instead of expanding it. (Keep Cool/RCA released his Bandana collaboration with Madlib in 2019.) The music is largely redolent of luxury-rap tropes, from an appearance by Rick Ross on “Lobster Omelette” to a Justice League beat for “Rabbit Vision.” There are some strong variations on this musical theme. Kaytranada sets a slurry pace for “Zipper Bagz.” Thomas Brenneck, Anderson .Paak, and J. LBS assemble a string-plucked melody for “Feel No Pain,” which is reminiscent of peak Wu-mania songs like the East Flatbush Project’s “Tried by 12.” Still, the mood recalls past Gibbs peaks, from 2020’s Alfredo with Alchemist to 2014’s Piñata with Madlib. (Both ALC and Madlib produce tracks on $oul $old $eparately.)

That latter classic showed a generation of gritty hustlers that the right formula could earn widespread attention despite a lack of corporate backing. There are many fathers to the ever-growing trend of sample-heavy street rappers clogging vinyl websites, from the late, much-missed Prodigy to Roc Marciano and KA. But Gibbs and Madlib’s Piñata undoubtedly played a key role. Further releases, from superior Piñata sequel Bandana to pairings with the Alchemist (2018’s Fetti and Alfredo) and his own ESGN projects (the cover art for 2018’s Freddie is still incredible) helped mold him as an independent empire builder. His signing to Warner Bros. in 2020 seemed less like a come-up than just rewards for an established star.

But as onetime friend-turned-rival Benny the Butcher, Westside Gunn, and Conway the Machine have found out, sometimes you spend so many years grinding towards the top that your persona is too firmly established once you get there, leaving less room for innovation. $oul $old $eparately is solid work made by an established character. Gibbs frequently discusses his Gary, Indiana origins. He flips too many lines about drug distribution. He remembers low moments that must be quite distant, given his “rich” status with “mob ties,” yet still haunt him. “Tell me what bitches know about hard times/Empty stomach give you the heart to do a homicide,” he harmonizes on “Dark Hearted.” Even the “Space Rabbit” animal motif he adopts is reminiscent of an earlier, zebra-shaped cocaine piñata. And yes, there is a cameo from Pusha T, the yeyyo God himself. ““My cocaine novella. Soap opera shit. These are the days of our pies,” he says on “Gold Rings.” Thank you, King Push.

Surely, Gibbs also brings in younger artists like Moneybagg Yo and Offset. He proves a generous collaborator, giving room for voices like Kelly Price, Musiq Soulchild, and Anderson .Paak to shine. And the “bonus track” on $oul $old $eparately brings a welcome surprise in Scarface. The Houston, Texas pioneer has weathered life-threatening health crises, so it’s a relief to hear him reunite with Gibbs nearly a decade after their memorable “Broken” duet on Piñata. Pointedly, Scarface is an example of a rapper who successfully evolved from the manic, crack-slanging lunatic of Geto Boys to the world-weary, spiritual-minded, community-oriented OG of The Fix.

“It’s like we failed our youngsters. It’s like we not giving the youngsters that game no more,” rues Scarface. Gibbs may have finally reached the penthouse suite, but he still has plenty of ways to grow.