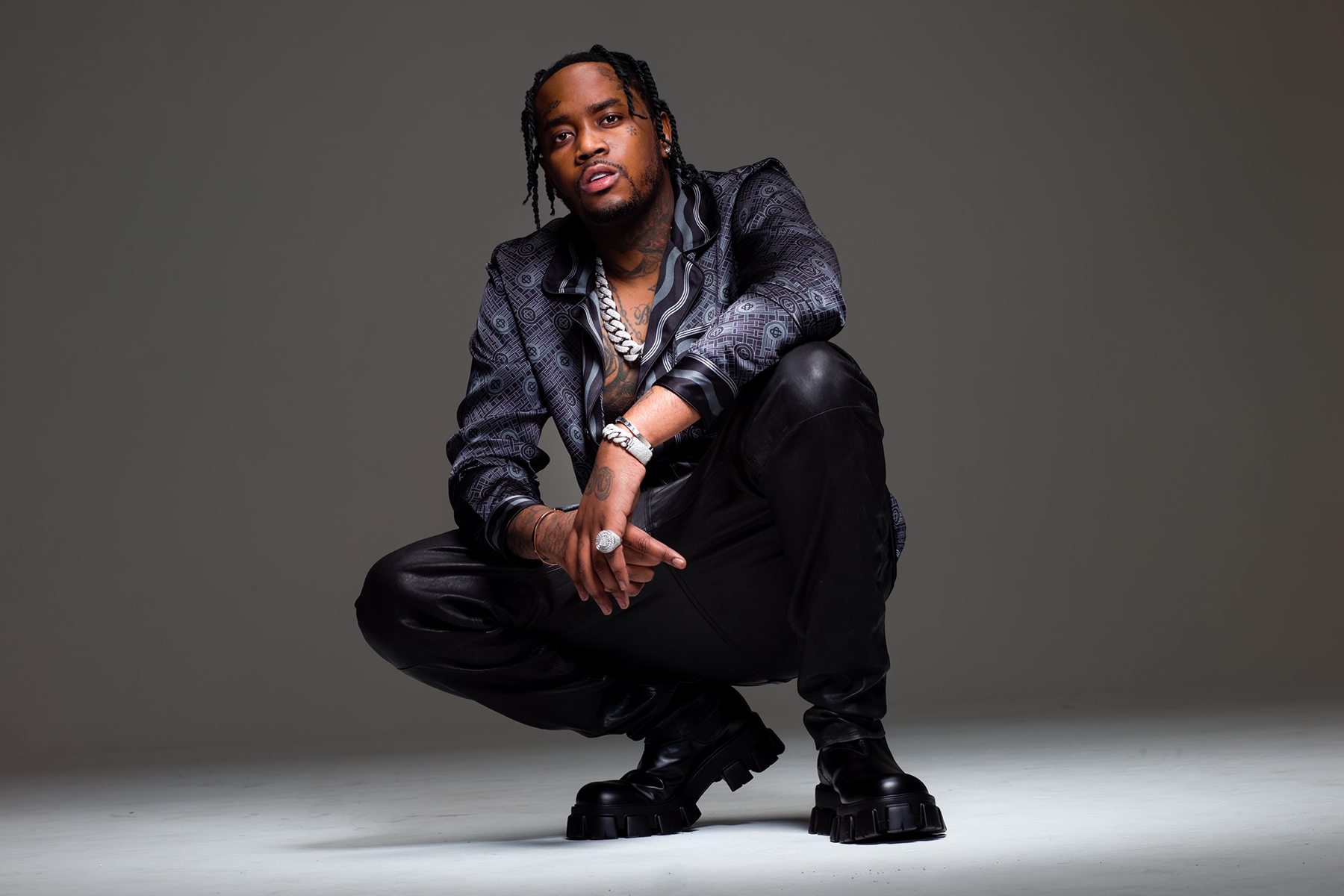 Fivio Foreign makes everything, even a threat, sound like a joyful improvisation. He’s loose (and jovial) with it, demanding, on his 2020 hit, “Big Drip,” “Send me the addy, I’m hunting him down,” as if his opps were brand new acquaintances he’s already sending NBA2K invites to. (By comparison, his late contemporary Pop Smoke, for all his gruff charm, was precise and threatening.) Fivio’s knack for delivering stick talk like it’s an impossible-to-turn-down elevator pitch, had made him Brooklyn drill’s leading spokesperson.

The point of so much of Fivio’s music seems to be: eventually, he’s getting to the point. His recursive vocal tics seem to mirror the roundabout symmetry of the viral dances featured in his videos. He takes what sounds like scraps, bits, pieces, flubbed lines (the stuff of half-written reference tracks), and makes melodic gold out of them.

Spur-of-the-moment bliss underscores B.I.B.L.E., the East Flatbush native’s debut. And Fivio builds on the sacrosanct themes he explored with his verse last year on Kanye West’s “Off the Grid,” which is one of DONDA‘s highlights. Ye executive produced the project, and, fittingly, it has an epic, gospel-tinged feel to it, providing a peculiarly catchy contrast to its vigorous big-ticket drill aspirations.

The strains of an ethereal hood hymnal open “On God,” where Fivio gives us his road-to-riches story in one breathless, soul-bearing blurt. There’s a newfound rigor to his bars, though, as he spits, “Opps know I’m not to play with/Nigga, how I’m not your favorite?” against the soft a capella refrains of a sanctified choir. The emotive quality of Fivio’s voice, enlivened by Kenyan-born crooner, KayCyy‘s fervent hook, gives the Brooklyn MC’s taunts (”I don’t know wherе you at, I’ma wait in your lobby/And I’m super sure I ain’t sayin’ no prolly”) an oddly high minded aura—drill music never sounded so devotional.

Less angelic is “Slime Them,” whose eerie skeletal synths and molar-breaking bass make a late night somewhere deep in Brooklyn (”Sprayin’ his body alive/I want him to see my face when he die”) sound as horrifying as a Blumhouse production. Still, Fivio’s ready-for-prime-time star power makes this—arguably his most aggressive song—stand apart from the death-obsessed, downtempo drone of garden-variety Brooklyn drill. And it’s telling that Lil Yachty, who makes a brief but chilling cameo, is the more menacing presence here.

It’s all praises due, though, on the jubilant “Through the Fire,” which boasts a soulful organ-combo riff that’s as evocative as Sunday candy and MLK-emblazoned church fans. Elsewhere, the meditative “Can’t Be Us” finds the son of a Pentecostal preacher counting his blessings (”I thank God for all my real niggas/I pray that God give me strength so I can deal with ’em”). It’s a way more chill vibe for Fivio, to be sure. But the easy conviction behind his words makes us remember why he won us over in the first place.

“What’s My Name,” on the other hand, taints the project with its employment of the so-called “sample-drill” trend—basically, the wonky bass and caustic drums you came for, along with some hastily aligned, obvious comfort-food samples you may or may not be staying for—with a weary rehash of Destiny Child’s 1999 hit, “Say My Name.” It feels unnecessary—especially since Fivio was at the forefront of bringing Brooklyn drill to the masses two years ago.

But lead single, “City of Gods” is a stellar love letter to Gotham—it’s like E.B. White’s “Here Is New York” for the demographic that commutes via E-Z Pass. Its anthemic, Alicia Keys–helmed hook has probably been heard by more Rotten Apple residents at this point than the “stand clear of the closing doors” announcement on the subway. When Fivivo brags, “This is the town of the big drip, smooth talk, Milly Rock, Shmoney Dance, Woo Walk,” the vibes feel electric. B.I.B.L.E., for the most part, proves that he’s about keeping that same energy.