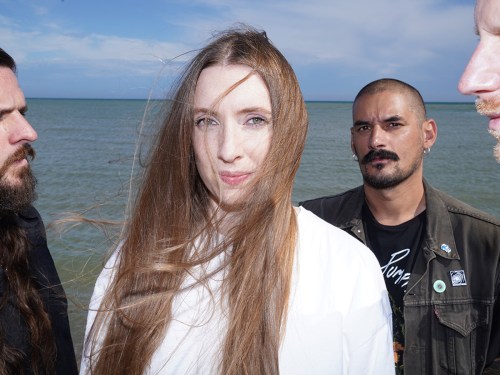 “Is it still OK to call you my disco pickle?” By the time that Florence Shaw, Dry Cleaning’s conversational poet-in-residence, asks that question on “Hot Penny Day,” a tune that marks the halfway mark for the group’s second album, Stumpwork, the answer will invariably be yes. Any reluctant cukes likely would’ve moved on to another record several tracks earlier since the group makes such a divisive racket. As on Dry Cleaning’s lauded debut, New Long Leg, the quartet specializes in the audio equivalent of a double exposure: Shaw’s bandmates bang out Smithsy post-punk while she pours out a waste land of poetry fragments like a post-postmodernist T.S. Eliot (though with even more non-sequiturs).

The group projects its duality well with Stumpwork’s album art: pubes elegantly spell out the album title (ironically, a reference to embroidery) on foamy bar of soap. Their music is still squarely middlebrow, and if they divorced Shaw’s words from their jamming, each element of Dry Cleaning’s sound could exist beautifully on its own.

Although the band cites influences like alt-rock groups Pavement and Polvo, neither of whom were big enough for MTV’s Buzz Bin in the Nineties, their second album, produced, like their debut, by PJ Harvey collaborator John Parish, recall a wider palette. Echoes of Pizzicato Five’s upbeat lounge soundtracks bounce around lead track “Anna Calls From the Arctic” (with sax!). Johnny Marr’s brand of lush, poppy guitar backwashes sweep away “Kwenchy Kut” and “Gary Asbhy.” A little of Pink Floyd keyboardist Rick Wright’s organ carries them (and us) on “No Decent Shoes for Rain.” And “Conservative Hell” feels like the Sex Pistols minus one (Steve Jones). They play vibraphone, clarinet, tape loops, kazoo, and “bird,”  and have hired a flugelhornist.

Their most obvious touchpoints, though, are Sonic Youth and My Bloody Valentine who were blissing out on noise and wobbly whammy-bar guitar lines at a time when Dry Cleaning’s instrumentalists were still babies. The music is engaging and punchy, and if the group were all instrumental, like Mogwai or Pelican, they’d still attract a respectable following.

Shaw’s verses, culled from observational walks in London and Bristol, dart from subject to subject at a frenzied pace. She offers jokes, koans, polemics and nonsense, all spoken or barely sung, with such variety that some listeners will be reaching for Ritalin. She often repeats phrases in unusual ways to catch your attention. Unlike New Long Leg, she largely didn’t cull her words from past writings but instead improvised in the studio, which makes Stumpwork’s stream-of-consciousness a little more coherent. (Who’s afraid of Virginia Woolf indeed?)

“Nothing works/Everything’s expensive/And opaque and privatized,” she offers in the same breath as, “My shoe organizing thing arrived/Thank God,” on “Anna Calls From the Arctic.” The track “Gary Ashby” is about a lost family turtle; “Are you stuck on your back without me?” she wonders. And on “Hot Penny Day” she drifts from “I see male violence everywhere” to “Beautiful face, softness/I think ‘big soft bed club.’” On the title track, she offers, “I’m not in charge of what I do,” which somewhat explains the strangeness of her diversions.

Other choice one-liners: “Don’t touch my gaming mouse, you rat” (“Don’t Press Me”). “I’ve seen your arse but not your mouth” (“No Decent Shoes for Rain”). And “I will risk slow death for Chinese spring roll” (“Liberty Log”). But overall, it’s the lacunae and chaos of her poetry that makes her words so amusing without ever feeling grating.

Her most cogent moment of wisdom — her “Everybody’s Free (To Wear Sunscreen)” revelation — comes on the final track, “Icebergs,” when she suggests, “For a happy and exciting life … Stay interested in the world around you/Keep the curiosity of a child if you can.” Then, apropos of nothing, the word “resuscitator.”

Shaw tries to sing here and there (notably on “Driver’s Story”) but Dry Cleaning’s words and music seem to work best together when they’re working independently of each other. The band’s peers in the sing-speak/post-punk group Wet Leg do a better job overall of conjuring joy from the marriage of poetry and music but what Dry Cleaning do feels unique. They never try to tell full stories (like King Missile did) or beatify Shaw’s words (like Patti Smith does). They simply demand their disco pickles’ undivided attention to make sense of the vile beauty of the sounds of pubes on soap.